6 First Nations Artists That Should Be On Your Radar 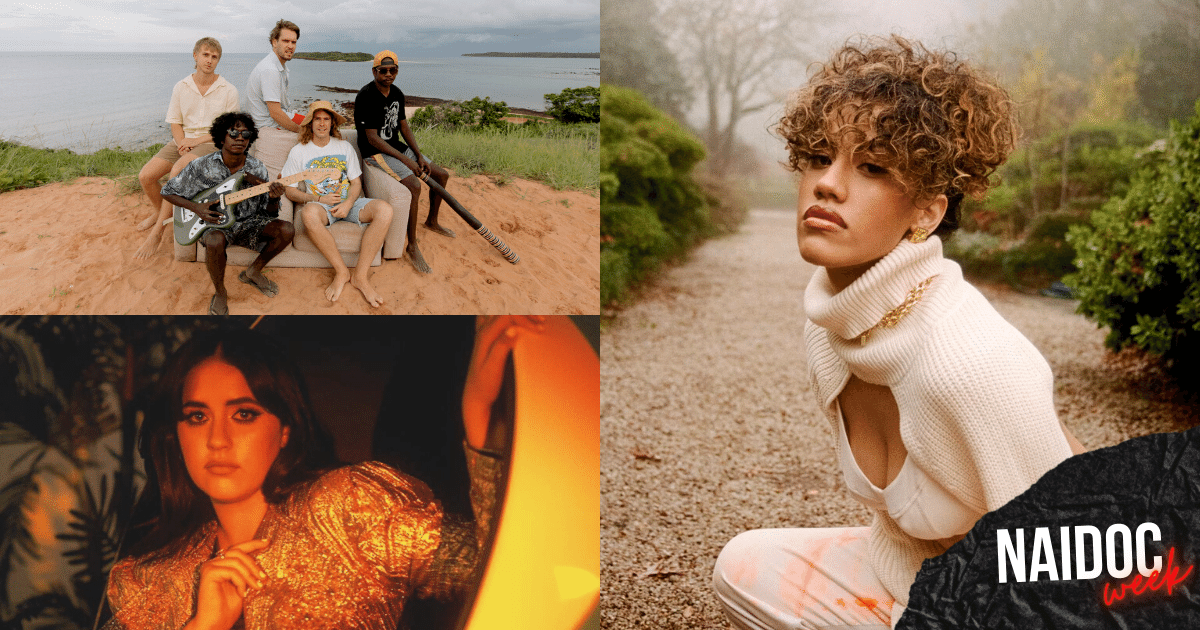 Happy NAIDOC week! In celebration of the history, culture, and achievements of Aboriginal and Torres Strait Islander peoples we've hand-picked some of our favourite First Nations artists that you ought to have on your radar.

19-year-old Dharawal singer-songwriter Becca Hatch has been absolutely killing the game and is an integral part of Australia's flourishing R&B community. In 2017 she won triple j's Unearthed High Indigenous Initiative and has performed alongside the likes of Briggs and Baker Boy. Her most recent collab with hip hop legend B Wise is a particular office fave of ours. Listen to the new collab via Spotify.

Hailing from Yirrkala, a community in East Arnhem Land, King Stingray is an outfit started by Roy Kellaway and singer Yirrnga Yunupingu who formed the group as a means to make music separately to their family's musical project Yothu Yindi. The band bring a unique blend of surf, indie rock and funk to the table and seamlessly combine this sound with their Yolngu rock heritage.

Listen to King Stingray's latest track Get Me Out on Spotify. You can also see the outfit perform in virtual mode at Splendour XR later this month - tickets via moshtix.com.au or catch them live in the flesh at Vivid LIVE at Sydney Opera House alongside Briggs and Alice Skye on Fri 20 August - tickets via sydneyoperahouse.com

Loren Ryan is a proud Gamilaraay artist who has been dishing out sellar harmonies and soul-driven hooks since 2016. Her first release of 2021, 'Little Darlin'' takes you on a journey of captivating splendour, featuring a strong country-rock influence that seeps through into her modern grassroots sound.

Listen to Little Darlin' via Spotify.

If you're on TikTok you might have stumbled across 21-year-old Indigenous rapper YNG Martyr. He first broke onto the local rap scene after his meme campaign 'Nike Ticks' went viral on the social platform, landing him a record deal with Black 17 Media. His rap style is unabashedly self-aware and features hard-hitting beats paired with devilishly cheeky lyrics.

Mackay-based, Groote Eylandt-raised Indigenous artist Tia Gostelow is one artist we've had our eyes and ears transfixed on for quite some time. If you're a fan of shimmering pop/folk sounds then Tia is the artist for you. We'd suggest getting stuck into her 2020 album 'CHRYSALIS' - it's jam-packed with groove-laden tracks that you won't be able to get out of your head!

Listen to 'CHRYSALIS' via Spotify. You can also catch Tia Gostelow performing live at The Triffid in Mianjin (Brisbane) on Sat 31 July with support from Sahara Beck. More info and tickets via moshtix.com.au.

Kobie Dee is a 23-year-old Gomeroi artist from Bidjigal Land in Maroubra, South Sydney. The rapper stepped onto the scene in 2018 and continues to impress crowds with his unashamed honesty and strong lyrical messages.

22nd September, 2021 - Just when you thought the lineup couldn't get any better,&nbsp;Bluesfest&nbsp;has...

#KEEPYOURDIS-DANCE: New Aussie And Kiwi Releases To Listen To This Week

Moshtix Guide To The Best Live Stream Gigs And Events

16th September, 2021 - As lockdowns and social distancing continue in this...
x